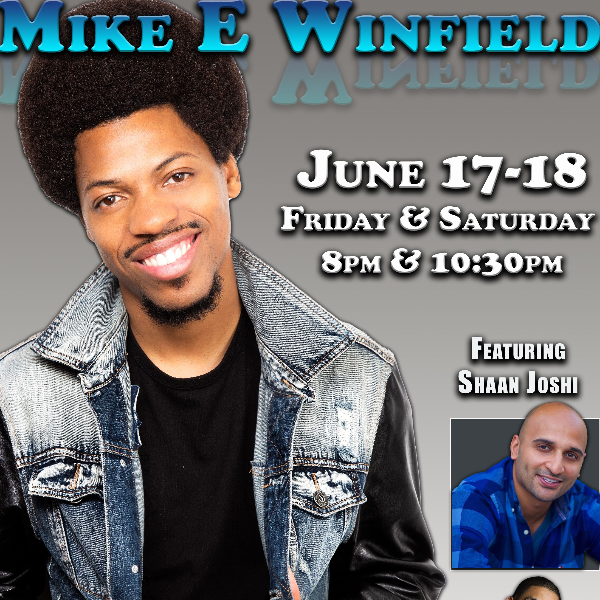 2 item minimum for each person.

Check In 30 minutes prior to showtime.

His comedy is refreshing & relatable in a way that makes him a comedic genius. Hailing from Baltimore, MD, Mike E. moved to California to pursue comedy & to escape the rough streets of Baltimore, remembering how he found a gun under his Mom’s pillow as a child, & thought, “I CAN’T WAIT FOR MY TEETH TO FALL OUT.”

“ONE OF THE MOST BRILLIANT COMEDIANS YOU WILL EVER WITNESS. A MUST SEE SHOW!”

The comedy scene felt natural to him & he embraced it raking up credits such as The Late Show with David Letterman, a reoccurring role on NBC’s The Office, Brad Paisley’s Comedy Rodeo on Netflix, an Emmy Nomination, & multiple movies in post production, one with the rapper DMX called PIMP. Somehow in the midst of rising to the top, he had to grow up quickly because he fell in love & married an older woman with a child.

That was actually the problem, he wasn’t ready to be a husband, so he made many mistakes within the marriage . He has since learned & developed a bond with his stepson, whom he jokingly refers to as StepMAN because they’re close in age. He takes his ups & downs in his life & marriage & turns them into jewels he releases on stage.

He often jokes about the age difference & his wife treating him like a kid, for instance in the grocery store she yells in front of everyone, “You better not throw anything extra in the shopping cart.” His response? “Well that’s hard for me to do while I’m sitting in it!!”